On February 16th, I voluntarily removed myself from the discussions on secondary suites at the Land Use Planning & Transportation Committee. Realizing that there may be a possible conflict of interest, excusing myself from the proceedings seemed to be the most prudent course of action at this time.

Family members of mine will be moving into my residence for which I will be in the position of putting forward an application for a secondary suite in the near future.

Regardless of any conflict I have, the issue of secondary suites in Calgary is an issue that affects not only Ward 12, but the entire city.

With the decision coming to committee and council, there are a number of factors that must be addressed in order for me to vote in favour of allowing secondary suites throughout the ward, and the City of Calgary.

Going forward I believe that if secondary suites are allowed, there must be several measures in place so that the surrounding neighbourhoods are not negatively impacted, such as;

The issue of Secondary Suites will be coming to committee this week (February 16, 2011). In preparation for the meeting, I have included a map of Calgary which shows all residential areas in Calgary (both single and low/medium density multi-unit) that either allow Secondary Suites as discretionary uses (green) or do not allow secondary suites (red). 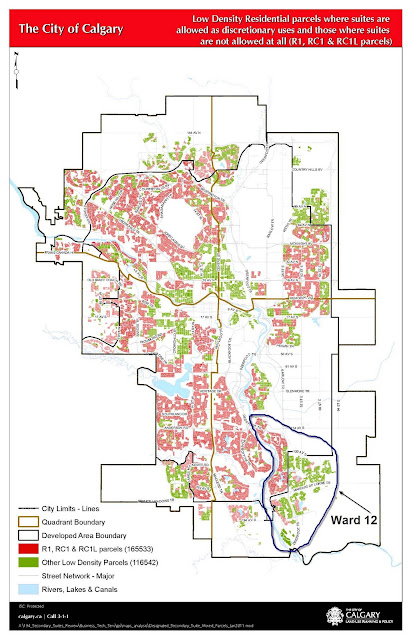 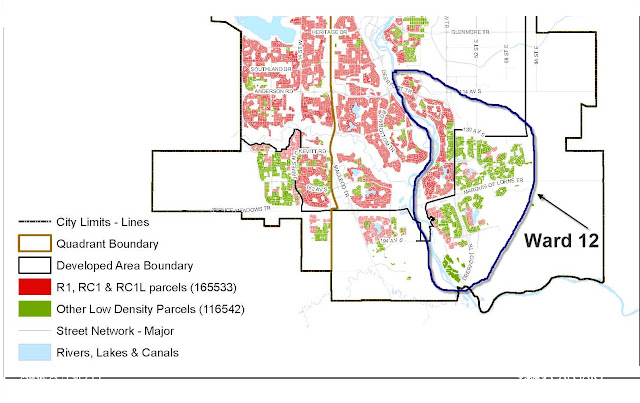 Approximately 40% of Ward 12 falls into the red, or portion that does not allow secondary suites, while close to 60% of Ward 12 is currently zoned to allow the option (green).

This would include the areas of Douglasglen, Douglasdale and McKenzie Lake.

Committee, and then Council, will discuss the potential of allowing secondary suites in the areas that are currently marked in red.

Some of the questions being posed are:

I would appreciate your feedback on how the residents of Ward 12 feel about this issue. Please email your comments to me at eaward12@calgary.ca (please include the name of the community you live in as well as any contact information you can provide).